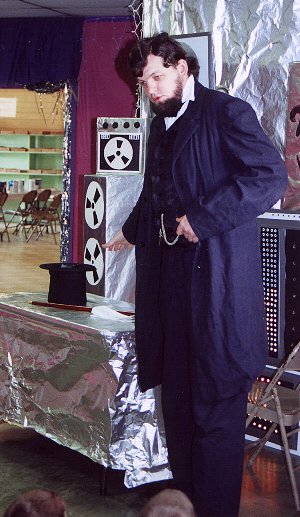 What were some of your hobbies?
I don’t know if you would call them hobbies, exactly, but in my free time I enjoyed spending time with my boys, talking with other lawyers and telling jokes, or “Lincoln stories”, as some people call them. When I was young I was also a pretty good wrestler,

What school did you go to?
I went to two schools about two miles from where I lived, but they were only open for about two or three months each year. I could only go to school when I wasn’t needed to work on the farm. The school was called a “blab” school. It was called that because all the students said their lessons out loud all at once, so it was very noisy.

How old were you when you died?
56 years.

What play (or movie) were you watching when you got shot?
“Our American Cousin”, a play, which was a comedy. There were no movies in 1865.

Who assassinated you? Why?
John Wilkes Booth. He was very angry because the South was about to lose the Civil War, and he believed that the South was right. He thought that if he killed the President, and some friends killed the Vice-President and Secretary of State Seward (which they tried to do, but failed), then the North would not know what to do and would stop fighting. Then the South could win.

Why did you want to become president?
I got into politics, and eventually ran for President, because I wanted people to know who I was, and to remember me for doing something good. I said when I was young “Every man is said to have his peculiar ambition. I, for one, have no other so great as that of being truly esteemed by my fellow man, by rendering myself worthy of their esteem.” I felt that there were two things which were very important to preserve democracy, not only here, but all over the world. One was to prevent expansion of slavery into the Western territories, and the other was to prevent the Union from splitting up. I felt it was my duty to do my best to prevent those two things from happening.

How hard did you have to work as the president? Was it fun being president?
I worked just about every day from early in the morning until very late at night. I was used to that, though, because I had worked long hours most of my life. While there were parts of the job I enjoyed, it was a very sad time for me and for the country, so I cannot say that I enjoyed it.

How many kids did you have?
Four children – all boys. Their names were Robert, Eddie, Willie, and Thomas. Thomas had a large head and was quite wiggly as a baby. I told some friends he looked a little like a tadpole, and so he was nicknamed “Tad”.

Why did you always wear that tall black hat?
The tall black “stovepipe” top hat was common at the time – many men wore them. Mine were taller than most, and I flattened the brim on mine, which made it look even taller. I liked it that way. I also used the hat to carry important papers in when I was working as a lawyer. That way I could carry my papers with me and still have my hands free.

Did you have any pets and if so, what kind?
I had pets all of my life. I had dogs, including a dog named Fido that I left with neighbors when I went to Washington as President. My family also had cats, and my son Tad had two goats while I was in the White House.

How did you become alive again?
I am not alive, physically. I live on in the minds and hearts of people all over the world who believe, as I did, that all men, everywhere, should be free.

How many stars were in the flag when you were President?

This is kind of a tricky question. When I first became President, there were 34 states, but only 33 stars on the flag. Kansas joined the Union in January of 1861, but its star was not added until the next July 4th. At the end of my presidency, there were 36 states, but only 35 stars. West Virginia and Nevada had both joined the Union while I was President, but Nevada’s star was not added until July 4, 1865.

The correct answer is 33 stars when my presidency started, and 35 stars when it ended.

The most DIFFICULT question:
IF YOU WERE PRESIDENT TODAY, WHAT WOULD YOU DO?
My answer:
I cannot tell you SPECIFICALLY what I would do if I were President in your time, since I am quite certain many things have changed between my time and yours. I am certain that many new things will have been invented, and I hope that many of people’s attitudes will have changed. I hope, for instance, that by your time both women and black people will have been given the right to vote and to fully participate in the American experiment. I can tell you this; I have always believed in the ideals set forth in the Declaration of Independence. “All men are created equal”, for instance, is an ideal, but it has not been achieved in my time. I have never been an idealist, but I have always believed in doing everything possible, given human limitations and political realities, to achieve the principles set forth in that Declaration. We must trust in the ultimate justice of the American people. There is no better or equal hope in this world.

This is not a simple answer, but it is the best answer I can give to a difficult question.

And one of my personal favorites, although not frequently asked,
came from a kindergarten student:
(Is Mr. Abe Lincoln’s hands bigger than Michael Jordan’s?)
I don’t know for sure, but they’re probably close to the same size.

Thanks for all your wonderful questions! Keep them coming!